those holes are spaces for light 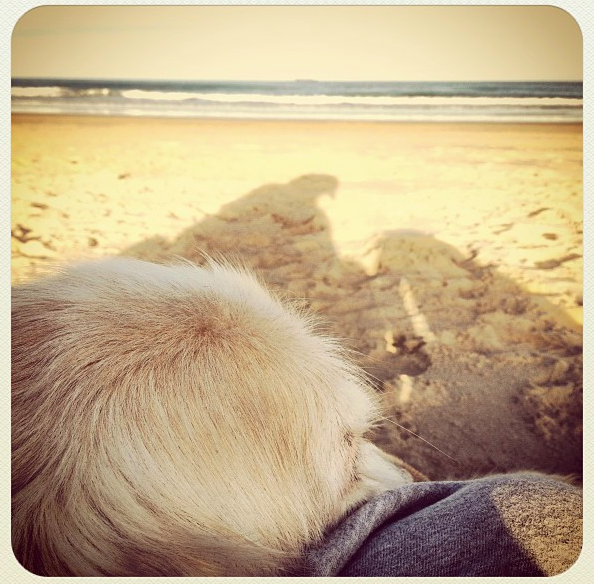 Which was surreal, because one second he was still there, still warm and moving slightly under my hands, and then he wasn't.

And it hit me then that it was over, and hit me again and again, as we wrapped him in a blanket,
as people spoke softly about things and moved about the room;
it hit me in waves—until I felt nauseous, and I had to go outside and drink water by the car as they carried him out—that he was gone.

And I wanted to step back in time, to please sit a second more with the breathing him, but that's how it was now and I couldn't change it, and all I could do was keep on living while he didn't.


And now it's been two days and I keep crying.
I miss my dog, and I know people lose dogs all the time, but I can't stop how it hurts. And it has opened up all these holes I thought I'd filled as best I could. I miss my grandmother and I miss my namesake aunt and I think of my father and my friend from high school who died and I think of my mum's best friends and I miss Jennifer.

Their spaces are empty and full at the same time, like the air has rearranged itself in their shape.


And I think of how much space the loved take up. 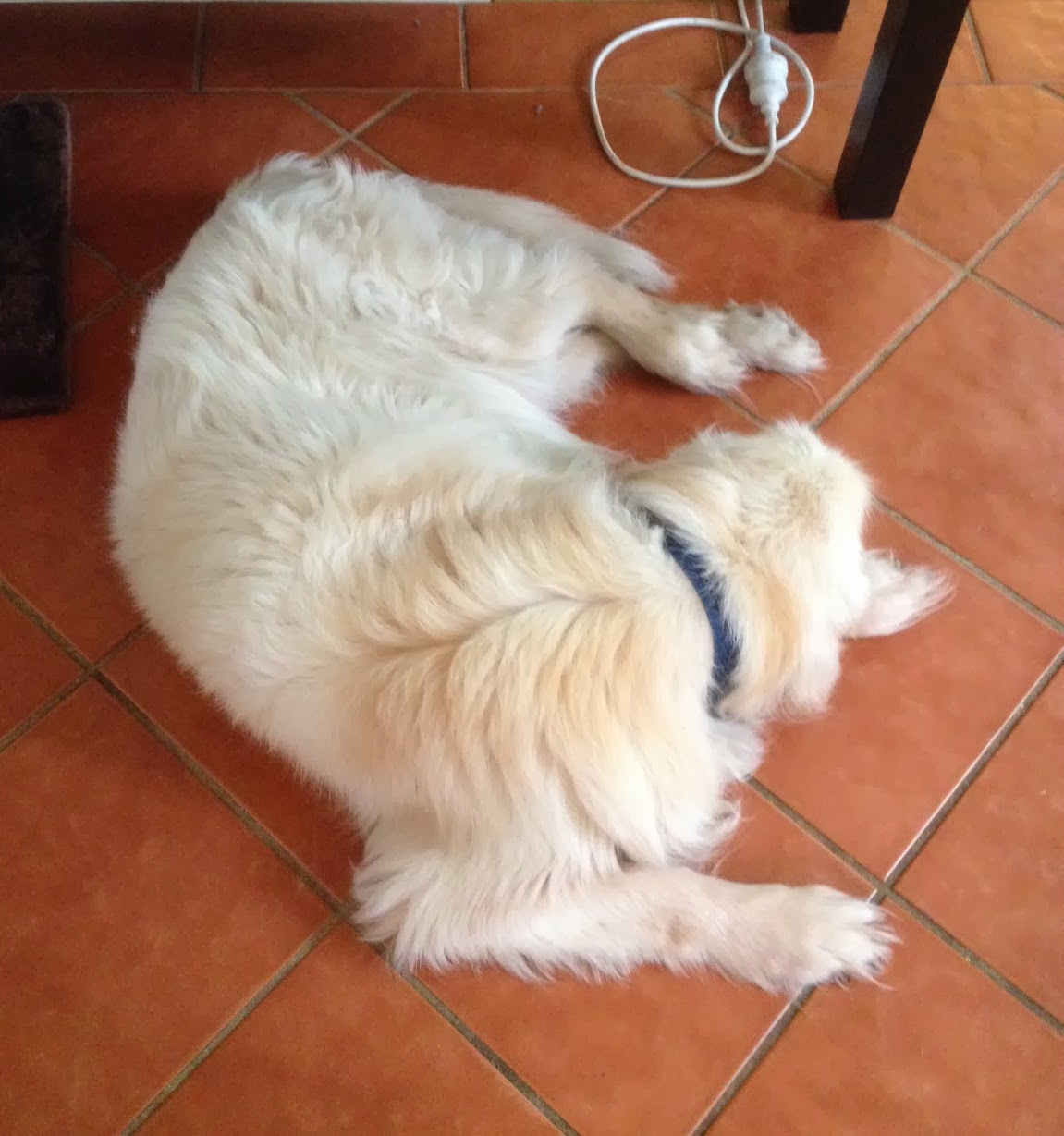 It's real, because there on those tiles, precisely, is where he lay,

and there in that chair of my memory is my grandmother saying, "Hello! Hello!" as I enter the room,

and there in that hospital bed is my aunt calling out as I leave, "And I love you too, so much!"

and there in that photograph is my dad flying a kite, his hair curling in the wind

and there in her words, is Jennifer always. Noticing, marvelling, guiding me to beauty.

And it is so beautiful when you see what they have left you.

It can take your breath away. Leave you weeping and smiling at once.

Those holes you thought you had to fill just so you could keep moving…
those are the spaces they made and they're not supposed to disappear.


You're not supposed to fill them. Those holes are spaces for light.


I think of my dog and how in his final weeks he lay right in the kitchen by the cupboard so you had to step over him to enter or leave.

On his last day, every time I went near him, he lifted his head and followed me with his eyes

as if to say

And on his last day, before I knew it was his last, I sat with him and brushed his old fur. And he and I looked at each other for long seconds until I put my forehead on his, and after a while he lay back down.


And when it's over you get to keep those moments

and the space they made.


Now you get to remember me." 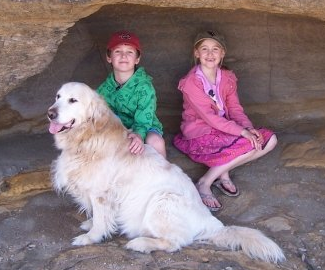 [Almost five months ago, my little family and I set off on a Grand Adventure… to a tiny town up North to attend a week long circus training camp and festival, where my son was going to perform with his troupe and have One Excellent Week of training. In the meantime, the rest of us planned to frolic, explore the nearby towns, swim in the river, watch shows, and REST.

Well, things didn't go exactly to plan, and what ended up happening was one of the most challenging not-quite-holidays of our lives. But at some point during the whole crazy mess, I made a discovery that left me feeling invigorated, truly alive, and most of all, grateful.

This is the tale of that discovery and the path that led me to it, told entirely in Facebook status updates! I never wrote about it here, on this blog, and that feels strange… because even though I'm hardly ever here at the moment, this is still my little Scrapbook Space. This is where I get to place the parts that make up the puzzle of me, and my family, and my very own precious life. And I want to paste those long ago words here… so I can find them always, and remember, and be glad.

*with bonus photos at the end—never before seen footage and so on—of some really Good bits in between (and after) the Bad.] 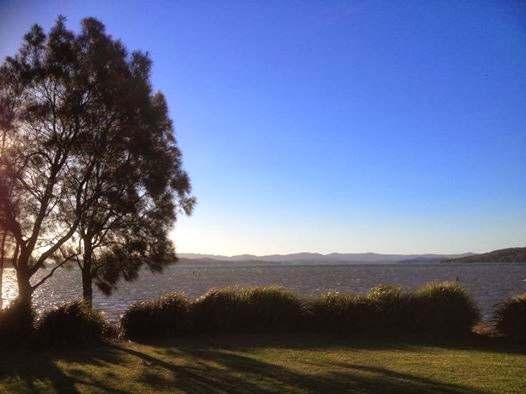 This is a nice lake… I'm really glad we are camping next to it :) On our way to Mullum Circus and many beautiful adventures! Thanks to our dear pet sitter, all is well at home too—the cats aren't even fighting (yet)! Which makes this a great holiday already. 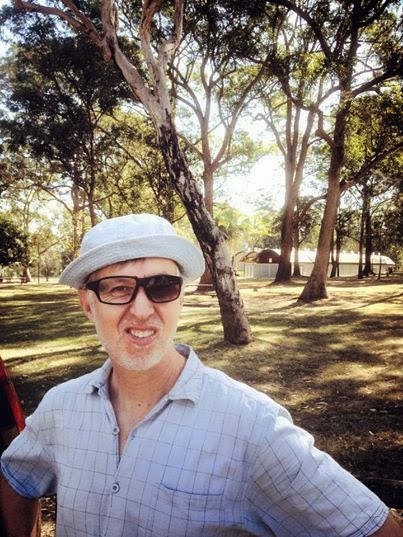 Road trips are never boring with this guy… 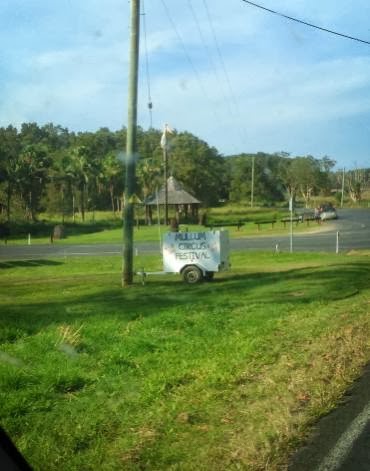 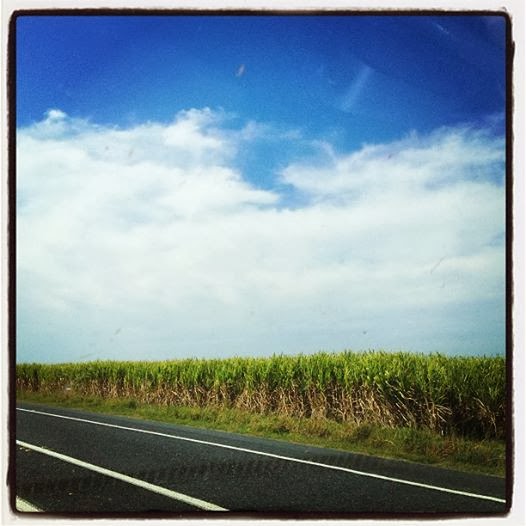 We have entered Sugarcane Land. As far as the eye can see, cane waving...and little houses squatting stolidly inside the fields...and a boy digging with a stick in a bare field, looking carelessly for snakes? And then mountains like pointy hats rising.... Green is all around. 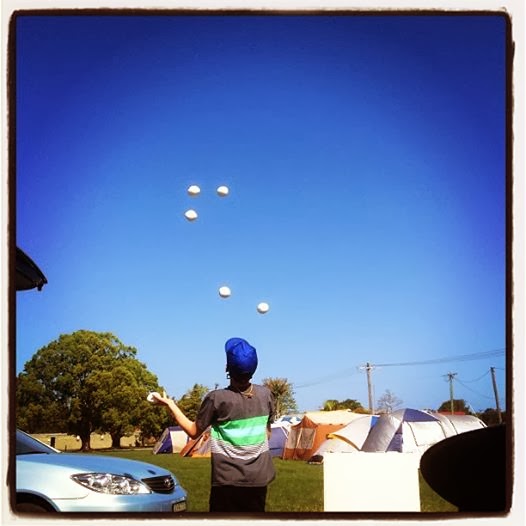 Just another day at the circus… :) 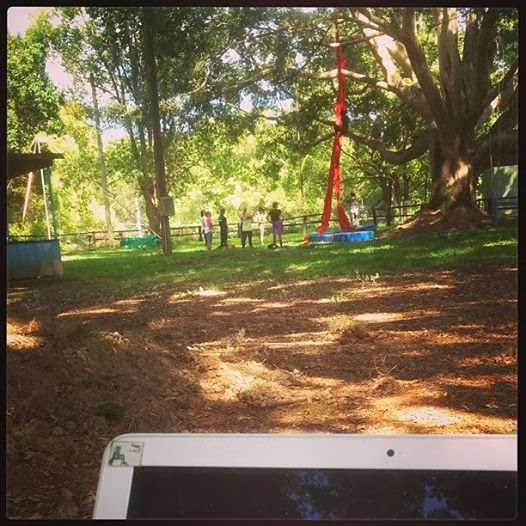 Writing with my girl...under fig trees big as churches...watching people take to the air on great red ribbons…bliss.

Well the circus adventure hasn't gone quite to plan...our circus boy got sick! Four days and nights of coughing relentlessly, long nights of sleeping (not sleeping) upright in the car, asthma bad enough we had to find the circus doctor in the night, plus flu and fever. We have ended up in a local hotel just so my boy can rest and sleep, and he has missed almost all of his beautiful training camp. Such a shame! We are looking for the positives as best we can, and hoping things turn around soon. It is so beautiful here; silver linings are all around, I'm sure.

Thanks everyone for your lovely and kind comments on my last update! We are (I think and hope!) on the mend. My boy is (VERY gently) participating in his first training session in 3 days after being really sick, and I actually just saw a smile! I'm so thankful that the hours of tending have led to the beginning of wellness, so thankful that I have my endlessly beautiful family, so thankful that we've ridden this out together. Yesterday we sat over dinner and visualised this great, open positive energy flowing out, a whole lot of goodness and wellness beginning from that exact moment...no more feeling sorrowful, disappointed and sick. And now we get to live that lovely picture out. Lucky us :)

[And then…after days of heat and dust and coughing and doctor visits and sleepless nights and worry and feeling oh-so-far-from-home and trying to make the best of things and feeling sometimes overwhelmed and weepy,

I had a wee epiphany,

which is actually the point of this whole blog post :) ]

What happens when you realise your life is yours?

When you suddenly discover it's yours for the making, that it's entirely up to you how things are going to go?

You can't always pick the direction... sometimes you find yourself walking a path you believe you'd never choose... in fact, maybe you hardly ever get to choose the path. But I find (and keep finding) that it's what you DO with the path you're on that matters. It matters hard; it matters big like a mountain.

What you choose to do with what you're given... that's where the joy begins.

Last night at camp as wind rattled the tent and the night dipped into cold, my boy got his asthma back. He ended up coughing and weeping and totally overwhelmed. He was near panic, needing us to take good care, lift him out of the struggle, fix everything. As we hustled him out of the tent and into the shelter of the car, I felt all snarly and enraged, felt like shaking my fist at the world and saying, 'What did we ever do to you???!' And there was talk of leaving, finally bailing, accepting defeat. But it was close to midnight, so we settled my boy into the car with his sleeping bag and pillow, my husband beside him, and we grimly hunkered down 'til morning.

In the middle of the night I had to pee. I trudged across that long, cold field in the gusty wind, muttering and huddled in my jacket, wishing everything was different. But as I walked I suddenly thought, 'Hey. Hey. Why fight so hard? Why feel so lost? Look up!'

So I did.
And saw a sky wild with stars. A sky bright and fiery, just gloriously alight. After the expected 'Wow!' I thought, 'Hey, Self. What if you just accepted all of this...What if you just kept on? What if?'

And somewhere in the remaining trudge across that ginormous field, in the peeing, in the turning matters over in my mind, my view flipped. Suddenly...in that crazy wind and the nose-nipping cold, I felt exhilarated...the 'Bring It On!' kind. The kind where a tramp across a field to the loo at 3am becomes a triumphant stride back under a blazing sky. The kind where you suddenly feel wholly alive, almost in awe of the adventure you're on. What will happen next? Bring it On! Bring it ON.

And we slept so well, my little family and I. My girl and I like beans in our sleeping bags, snuggled close. My husband and boy in the quiet warmth of the car. All of us... we rested well and slept deeply. No more coughing, no drama, just real rest. What a surprise.
As for today? Well, the sun has done its thing again and risen. We're awake, well fed, alive. So, Bring It, world. Show me what you've got. 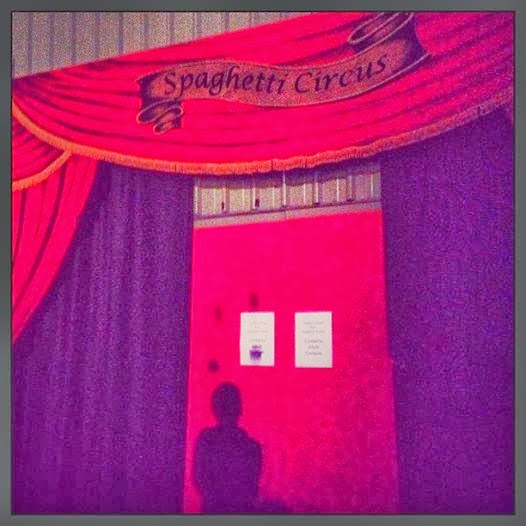