So, we're back. We've been back from our trip for three weeks now, and it's taken a while to adjust.

We tore straight into term 4 like it was a train we had to catch on the run, like we were hobos and we were racing after that thing with our bootlaces flapping and our hair in our eyes. We leaped on, and have been rattling on the rails ever since, looking at each other like, "Dude, why are we on this train called Reality and not still on holidays in Western Australia and looking at the sun setting over the sea?"

We're, all of us, shaking our heads a little in surprise. Or maybe that's just me. I don't think the kids mind. They got into a reading and writing rhythm while on holidays that just hasn't quit. All they want to do is write and read and read and write and so that's kind of all they're doing. Meanwhile, I keep looking around and trying to come to terms with the fact we aren't on holidays any more and the sun isn't setting over the sea.

It was one of the happiest times of my life, actually.

But I took a lot of photos. Like, 1,400 photos. And when I got back I thought, "I need to blog about our trip!" But then I looked at ALL the photos and thought, "Ohhhh. Maybe tomorrow."

Which turned into "I will blog about it, but not today and tomorrow we're busy. So I'll do it the next day, or whenever I can sort out one thousand and fourteen hundred photographs."

Which turned into, "It's too hard. Maybe I'll start in November."

Which turned into, "How will I ever blog again??"

And that, of course, morphed into that classic existential question of:

"WILL I ever blog again?"

Well the answer is, Yes.

Our Trip to Western Australia

I got on that plane.

It wasn't easy; actually it was one of the hardest things I've ever done. Over the years I seem to have built my fear up until it has been extraordinary—this sturdy castle where I've holed myself up like a girl in the tower, or the grimy bearded dude in chains in the dungeon, or like the Beast. Whatever the analogy, there I had placed myself, more and more stuck, from the time I was 16 'til now.

It took a LOT of work, months, just to book the plane. I'd been working on this solidly with my counsellor and my naturopath and my doctor for the past 9 months, and booking the plane was a huge step. A big healthy leap forward in managing my depression and anxiety.

But then it turned out I had to actually get on the thing.

On the day of the flight, all was mostly well…just a little tangle and jangle of nerves, until I was actually on that gangplank, walking towards the door of the plane.

Fear rose up and nearly swallowed me whole.

I walked and slowed. Slowed, slowed, until my kids were up ahead with their Nana, and people were streaming past like trucks on the freeway.

I kept looking at my husband. "Are we really doing this?"

Slower and slower we went down the gangplank. Almost to a crawl.

"Really? Are we really?"

At some point, he slid his hand between my backpack and my back. And we kept moving forward.

And I remember my husband's warm hand between my shoulder blades.

At some point, my kids were at the door of the plane. Their Nana could get on, but they needed boarding passes. I had those, in my hand. My kids' heads turned, and they searched for me. I waved.

And time sped up.

There we were at the door.

There we were handing passes to the flight attendant.

There. We were. On the plane.

In all the visualisations I'd done with my counsellor, nothing quite captured the metal-in-the-mouth, cold-skinned terror I felt then.

This was my worst nightmare. I was on a plane.

And my husband stood nearby.

He told me later that he'd kept a pressure on, with that warm hand of his, kept his hand firm on my back, knowing how much I wanted to turn and run.

He kept me moving forward. He steered me onto that plane, with love, so that I could face my fears, live through a moment I had built into a monster, and go have an extraordinary holiday with my family.

We flew, and I only cried three times.

And I told myself I was safe. And I smiled at my kids. And I noticed when my thoughts tried to sabotage me. And I gave myself a good stern talking to once, in the bathroom. And there was turbulence and a bumpy landing, but we were fine.

And when I got off, for the first time in years, I didn't swear I would never do that again.

I thought, We have landed.

And I took a photograph. 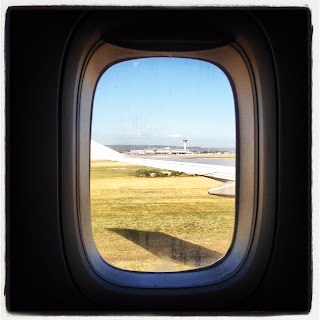 And I felt grateful and I felt excited and I thought, I am glad that's over, and then… I let it go.

And went and had one of the best holidays of my life.